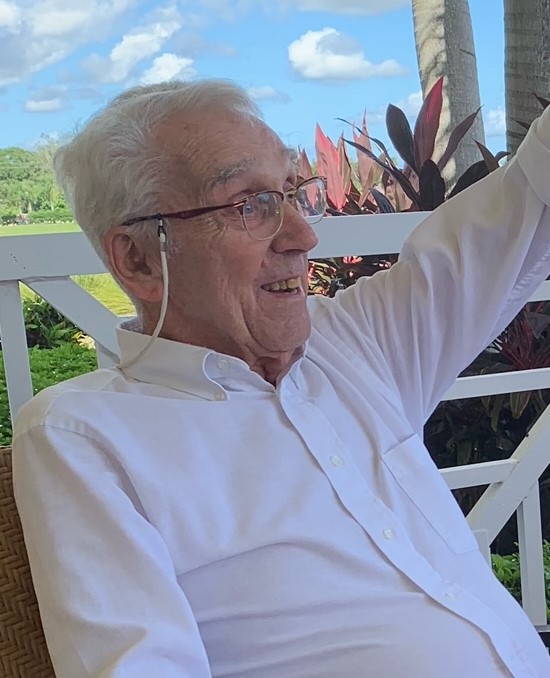 Richard Billings Clarke, 85, of The Brennity, Vero Beach, died on September 12, 2021. A beloved husband, father, uncle, Grampy, and great-grandpa, Dick lived a life filled with family, fun, and service to others.
Born in Buenos Aires, Argentina, Dick came to the U.S. to attend prep school at The Gunnery School in Washington, CT. After two years at Yale College, he joined the Air Force, serving as a B-52 navigator and intelligence officer, and completed his undergraduate work at Florida Southern College. After leaving the Air Force, Dick made a career in the Johnson & Johnson family of companies, working in labor relations and human resources.
But work was not what defined Dick. He always devoted his best time and energy to his family and his community. He met his wife Peg (nee Askew) on Cape Cod in the summer of 1956 and married her a year and half later; together they raised four children, leapfrogging from Mississippi to Japan to California to Massachusetts to Florida with the Air Force, and finally settling in Montgomery Township, New Jersey. He immersed himself in his children’s activities, volunteering for Cub Scouts, coaching Little League baseball, and emceeing home meets of the Pine Brae swim team. He also served on the Montgomery Township Board of Education; in later years, it delighted him that Fed Chair Ben Bernanke had followed in his footsteps in that role.
With their kids launched, Dick and Peg had more time to spend flying their beloved Cessna around the U.S. and the Caribbean. Dick stepped up to serve as President of the N.J. Pilots’ Association, and the couple began what became a long-standing tradition of donating plane rides to raise money for charity.
Dick and Peg retired initially to Seabrook Island, SC, where Dick coached soccer, tutored local students, wrote for The Seabrooker newspaper, was a member and ultimately Chair of the Planning Commission, and volunteered as a Spanish/English interpreter at the Barrier Island Free Medical Clinic. In 2016, they moved to The Brennity in Vero Beach. Dick put his Spanish language skills to work at the Indian River Medical Center and also served on The Brennity’s Residents Committee, including as President.
In addition to his more formal roles, Dick was a frequent and gracious host, eloquent public speaker, skilled breadbaker, and master Asador of Argentine barbeque. He loved to go fast, whether in an airplane or whizzing his red Porsche around the track at Sebring. And he loved being surrounded by family and friends. His favorite grace, said before every holiday meal, ended with a prayer to “keep us ever mindful of the needs of others”–and that is how he lived his life.
Dick is survived by his wife Peg, sons Bill (Michelle) and Geoff (Susan), daughters Karen and Melinda, nine grandchildren, one great-granddaughter, a large extended family, and many dear friends.
A family gathering will be held in the future. If you are moved to make a charitable gift to honor Dick, please support your local hospice.

What a wonderful tribute to an amazing husband, father, grandfather, and contributor to our world! I know he must have influenced many in a very positive way. Thanks for sharing his story – I hope he leaves others who will follow in his footsteps to make our world a more understanding, cohesive, and caring one.