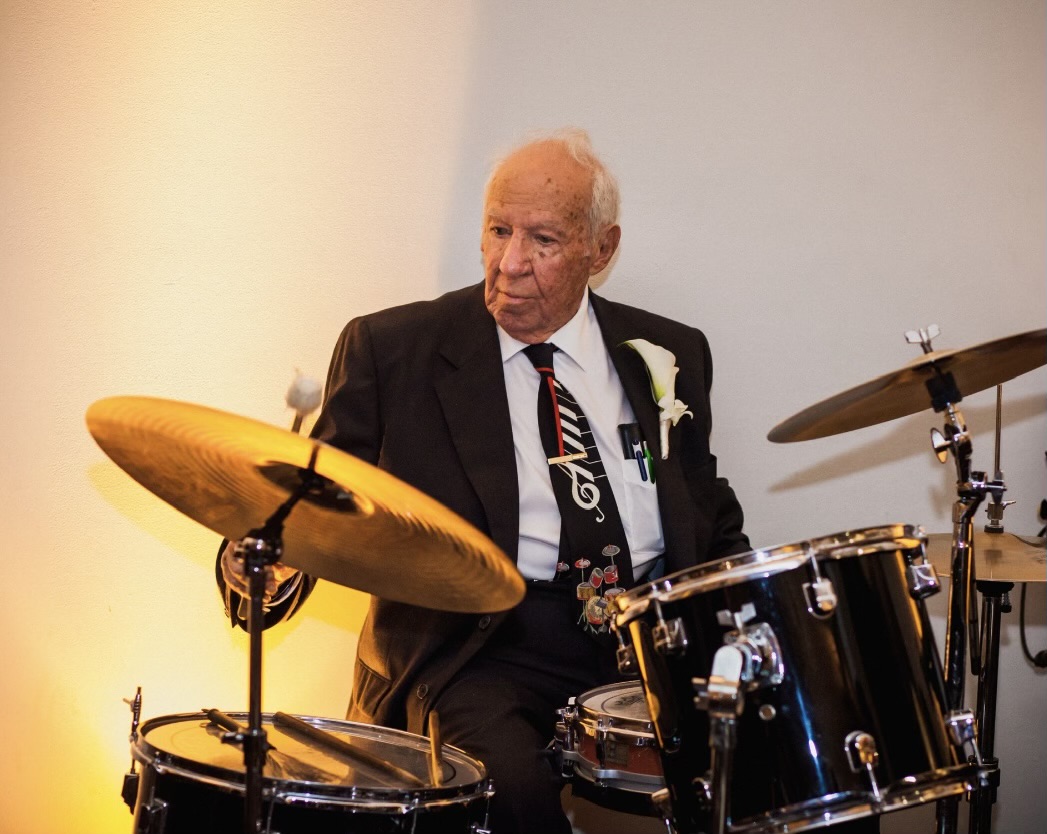 Jay was born on October 10, 1927, in Hampton Township, PA. He was a resident of the Vero Beach area for over sixty years. In 1945, upon graduation from Hampton High School, he enlisted in the United States Navy. He was preceded in death by his wife, Priscilla, in 1990 and companion, Dorothy Leslie, in 2014.
After his naval service, he was a cab driver in Pittsburgh and started his own 15-piece band at age 19.

Jay worked at several locations in Vero Beach and delivered flowers for Hutchinson’s Floral Artistry until shortly before his death. He enjoyed the happiness that a delivery of flowers brings.

His well-known greeting, when meeting someone for the first time, “name a bird for me” always brought a smile as did his “tweet-tweet” goodbye.

Jay’s primary vocation was music. He was a drummer and percussionist. He began his music career in the fourth grade with the clarinet. Soon his teacher switched him to drums because no one else could carry the rhythm. He was an admirer of the famed band leader, Glenn Miller, and took big band as his signature sound.

He has been the leader and/or drummer in five bands that perform in Vero Beach and the Treasure Coast – The Jay Bird Band, the Jay Miller Orchestra, the Silver Tones, he was the first drummer for the 20th St. Jazz Band, and the oldest member of the Treasure Coast Symphony. Jay made regular appearances at Holman Stadium from 1962 to 2008, while the Dodgers trained in Vero Beach.

He was a member of the First Presbyterian Church.

His final resting place will be at Crossroads Cemetery, in Allegheny County, Pennsylvania.

In lieu of flowers, the family suggests donations be made to the Treasure Coast Symphony, https://www.treasurecoastsymphony.org/donate, or VNA Hospice, 901 37th St., Vero Beach 32960.

Arrangements are under the direction of Millennium Cremation Service of Vero Beach. Condolences may be shared online at www.millenniumcreationservice.com.

We will be holding a memorial for dad on October 9th, 2PM, at the First Presbyterian Church. Then a “Celebration of Life” will be on October 10th, on what would have been his 95th birthday, 2PM, at the Polish-American Club. Please come join us.

Thank you and your sister for being so wonderful toward your father. Jay was so unusual. He loved creating a wonderful environment for others to enjoy. And he was a joy.

My name is Henri Armand. I share with Jay two grandchildren, Lindsay and Richard, and two great grandchildren, Quincy and Simone.
I recently told Fred that it is absolutely impossible not to like Jay, and I meant it sincerely. This nation, in fact, the whole world would be a more peaceful, more pleasant, more united place if most people were like Jay Miller. He will be missed.

Jaybird was a sweetheart! Everyone adored him and he brought happiness to everyone around him! He was the most active person over 90 I’ve ever known! Prayers coming to him dancing in heaven in his red shoes and prayers to his amazing family! I hope I make it as long as he did and as active as he was at his age! Ride the rollercoaster Jaybird ❤️ Tweet Tweet

Jay Bird! Sweet memories of you and special events at the Heritage Center will always remain!!! You sure will be missed by everyone in Indian River County!!! We know you are rockin out!!! My condolences to the family.

I was honored your barber Jay bird! I just came and gave you a beard trim. We had a great conversation and I’m so happy we did. God bless you “Dagwood” love Janine

The SilverTones so enjoyed our musical performances with Jay…..he was special and we will miss him. We know you are entertaining all the loved ones in Heaven, Jay. God bless.

I met Jay Bird at a facility where I was the activities director. He would come out and perform with his band. From the moment I met him he was a friend. Friendly and funny the residents love him and his group. He will surely be missed in our community. My condolences to the family.

‘Jay Bird’
What a pleasure to know ‘Jay Bird’. He had a story for everything. I pray his memory will be noted by the city of Vero Beach.