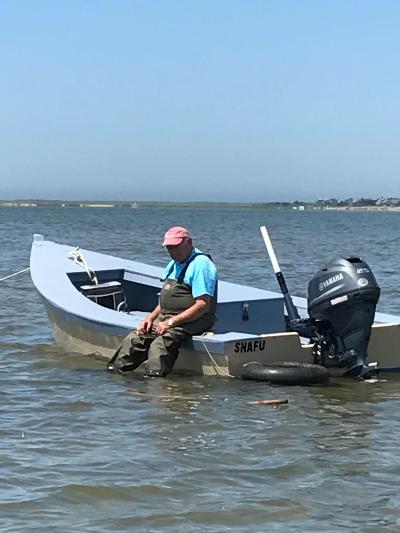 Thomas “Les” Eldridge, at the age of 89 of Sebastian Fl (formerly of Edgartown, MA and Nantucket, MA.) Passed away peacefully Sept 23, 2021, with his children around him in his home in Sebastian, FL.

He was born in Bayshore, New York in 1932. He was the only son of Donald and Margaret Eldridge. He graduated from Bayshore High School in 1949. He served in the US Army during the Korean War as a Medic with the rank of Sargent. He was a Private Boat Captain, Commercial fisherman, and a Shipping agent with his last vessel boarded at the age of 84.

His fishing adventures took him to many ports through out the oceans in places like Montauk, Chatham, Ft. Lauderdale, Palm Beach, Bimini, Cat Cay, Puerto Rico, Venezuela, and Hawaii but none more beloved than the rips off Martha’s Vineyard and Nantucket.

He was a proud member of the “Dirty Dozen”, a group of Nantucket friends who returned the Nantucket Lightship to the Island in 1975 where it served as a museum under the watch of the Nantucket Historical Association.

Always tinkering with boats; he loved designing and building the many boats he owned over the years.

An avid hunter, he recalled with great joy the days of duck and goose hunting with the boys @ the Holdgate camp on Muskeeget as well as his South Dakota pheasant trips with his son, son in law and grandsons.

He is survived by three daughters, Janice Eldridge of Sebastian, Julie Rezendes and her husband Alfred of Nantucket, Ma and Jayne Ruley, (his sister in-law but a daughter for sure ) of Port Charlotte, Fl; one son, William Eldridge and his wife Christine of Rowley, Ma; also two sisters, Babe Klees and Donna Pedersen of Islip, NY. He is survived by six grand children (Shaunna, Lindsey, Nick, Stephanie, Luke & Alex) as well as 6 great grandchildren.

Fair winds and following seas Captain as you pass over the bar.

Condolences to the family may be sent to www.millenniumcremationservice.com

Les was as kind a person as they come. He always welcomed me at Boston maritime port meetings and get togethers. Peace to his memory and grace to his beloved family.

I was sad to hear of ” les” passing, we had a grate working friendship; when he would supervise the docking of ships at eastern salt co. in chelsea ma. for discharge, his knowledge and great wit made working with him just a pleasure. I will miss that!