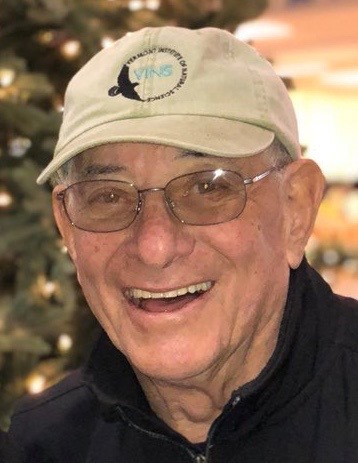 ABRAMS, Edwin D. Innovative Affordable Housing Developer, fair housing champion, happy husband, devoted father and fanatical Killington skier, of Vero Beach, FL and formerly Boston, MA, died Friday, November 29th at 84 years young.
Known by all as Ed, he is survived by his loving wife of 26 years, Marilyn Abrams, his children, Martha Abrams-Bell and her husband Matt Bell of Dorchester, MA, Adam Abrams of Boston, MA and Hannah Abrams of Mendon, VT. Additionally, Ed is survived by his three stepchildren, Maureen Robicheau and her husband Bob of Sandwich, MA, David Chandler and his wife Lisa of Vero Beach, FL and Chrissy Blindt and her husband Adrian of Plympton, MA, 11 step grandchildren and four step great-grandchildren as well as his sister Ruth Abrams Brebner, two nieces, a nephew, four great-nephews and three great-nieces.
In 1934, Ed was born in Cambridge to Archie A. Abrams, MD and Ruth D. Abrams. Raised in Brookline, MA, he attended school there and in Putney, VT. He served in the U.S. Army, received his B.A from Boston University in 1957 and master’s degree in City Planning from MIT in 1962. In 1968, Ed founded The Abrams Management Company, Inc., specializing in affordable housing.
Ed was an accomplished developer who was devoted to affordable housing and championed equality long before it was in vogue. His loyal staff, most of whom worked for him for decades, was particularly diverse before anybody required it. Known for his determination, innovative ideas, and amazing sense of humor, he was a true punster. Ed inspired many to become better…better managers, better workers, and better people. His kindness and generosity will always be remembered by many with whom he interacted over his long and illustrious career. His loyalty was unsurpassed, and he will never be forgotten by those who knew and loved him.
Ed pioneered the idea that residents could and should be included as equal partners in the ownership and management of their housing. He brought this vision to reality in the 1970s when he partnered with residents, bringing them in as full general partners in properties in Cambridge and Boston. These unique developments became a model and paved the way for several other similar partnerships. A few years later, Ed and his staff worked with the residents of Methunion Manor in the Boston Demonstration Project of 1978, through which the residents ultimately formed a cooperative. The concept was later employed for both the Public Housing HOPE VI Program, and for the HUD/MassHousing Demonstration Disposition Program. In 1973 he co-authored the book Managing Low and Moderate Income Housing.
Ed first chose Killington as his ski mountain in 1987 as a weekend warrior. When it came time for him to retire, he took to spending his winters skiing full-time in Killington and his summers in Vero Beach, FL. Ed continued skiing daily into his 83rd year.
He spent his final days surrounded by his wife and family who showered him with love, gratitude and appreciation while enjoying an abundance of laughter. Ed touched many people’s lives for the better, and he will be greatly missed by each of us who had the good fortune to know him.
A Memorial Service will be held on Friday, December 13th at 11am at The Lenox Hotel, 61 Exeter Street, Boston, MA, with a Celebration of Life immediately following until 2pm.
In his later years, Ed was a major sponsor of YouthBuild and the Vermont Institute of Natural Sciences (VINS). He would love for you to learn more about them and support their worthy causes, www.youthbuild.org and vinsweb.org.