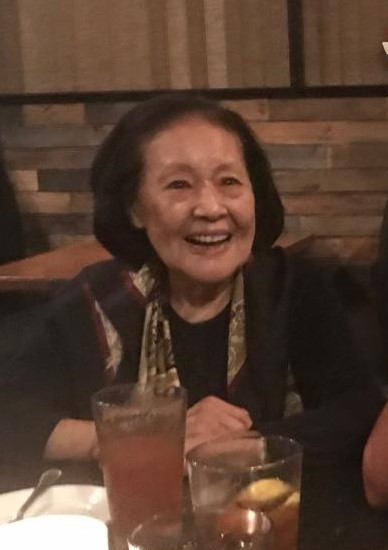 It is with great, great sadness that the family of Harumi Souder announces her passing on Wednesday, November 20, at the age of 83 at her home in Sebastian, FL. Harumi is lovingly remembered by her husband of 59 years, Lewis and their children Lewis (Robin) and Sonya (Rick). ‘Nanny’, as the grandchildren, Jessica, Dylan, Tomi, Kiarra, and Kai, fondly called her will forever be grateful for the time they spent with her and all the life lessons they learned from her. She will be greatly missed.

In Japan, Harumi was taught the culinary arts of Japanese cooking. After she arrived in the US, she was determined to prove that she would be a productive and contributing citizen. She took English, history and government classes, obtained her driver’s license and later became a US citizen. She worked jobs that were in the food industry while raising her family. After she had done her duties as a homemaker, she realized it was time for her dream. In 1985, Harumi’s Ichiban opened in Ocean City NJ. She had an abundance of great customers and employees who were instrumental in the success of the restaurant. Many wonderful friendships were formed and to this day, still exist. Ultimately, it was Harumi’s love of cooking and sharp mind that made Ichiban a success for 21 years.

Harumi’s wishes were to have a small and intimate memorial with family. In lieu of flowers or gifts that may be sent to family, Harumi requested donations be made to the VNA and Hospice Foundation, 1110 35th Lane Vero Beach, FL 32960.

Arrangements are under the direction of Millennium Cremation Service, Sebastian.  Condolences may be shared online at www.millenniumcremationservice.com.

Lew and family, so sorry for the loss of your beloved wife and mother. May she rest in eternal peace.

Lew, I’m so sorry to hear of your And your family’s loss. Know that you are all in my thoughts and prayers during this difficult time.

I remember coming with my family every summer and looking forward to seeing Harumi and Sonya at Harumi’s Ichiban. I was lovingly telling my boyfriend all about the great times we had at her restaurant and looked it up only to find out about her passing. My heartfelt condolences to her family and all that knew her. She will forever be a bright spot in my memories.