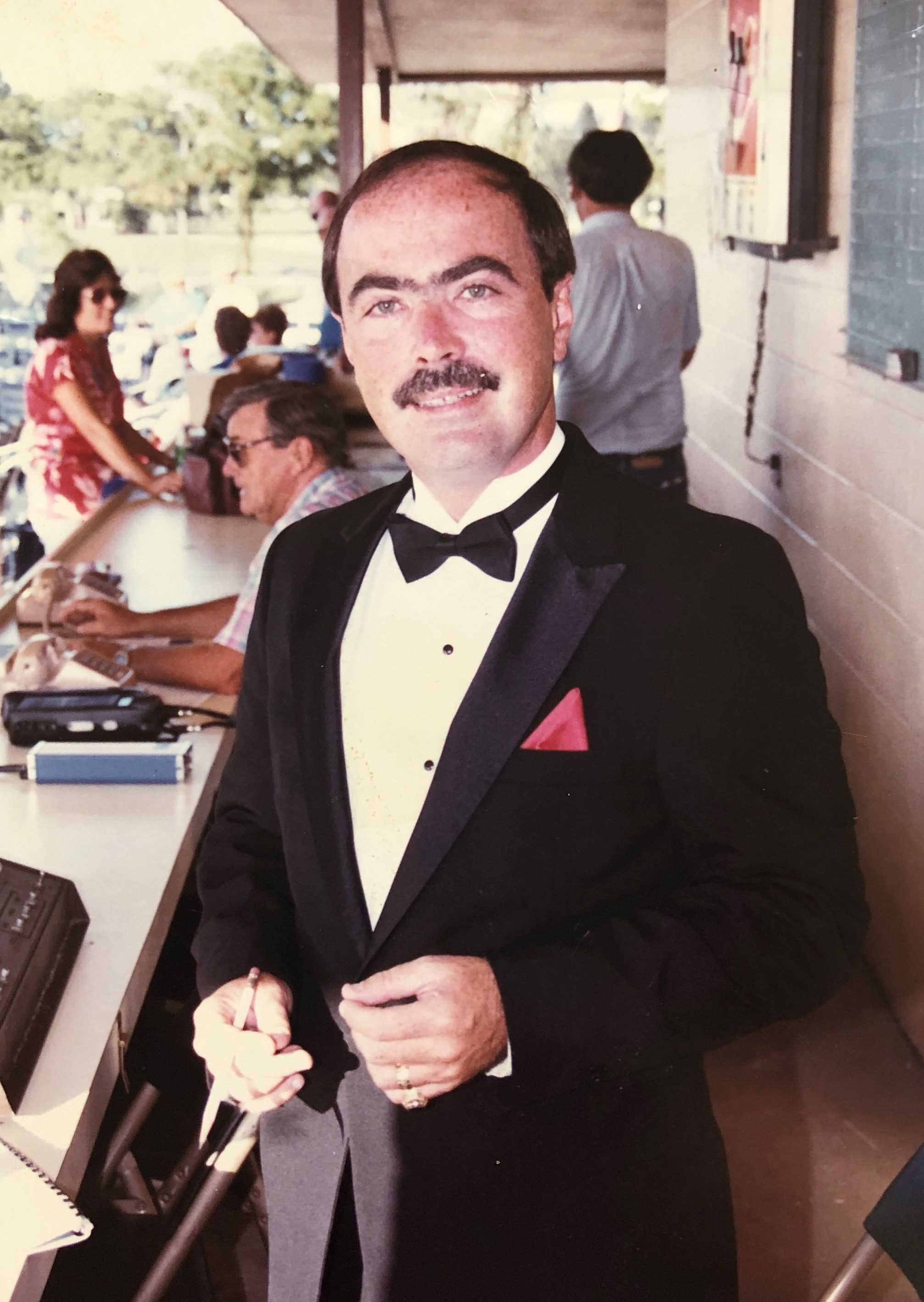 Born in Brooklyn, NY on April 17, 1951, the youngest of five children of Leonard Richard & Rita Sanchez. Joe was raised in Lynbrook, Long Island, & later, Douglaston, Queens. He graduated in 1969 from Holy Cross High School in Flushing, NY, where he was the editor of the school yearbook & sports editor of the school paper (“The Lance”). He was also president of the Forensic Society & a member of the student council. During his senior year, his classmates voted him as “having done the most for Holy Cross”.

Joe attended Seton Hall University in South Orange, NJ, from where he graduated in 1973 with an AB in Communicative Arts. While at Seton Hall, Joe was a broadcaster on the student run radio station, WSOU. Primarily a sportscaster, Joe broadcast the 1971 College World Series & numerous collegiate basketball games throughout the country, including from Madison Square Garden. Two of Joe’s WSOU colleagues, Bob Ley & Bob Picozzi, went on to distinguished careers at ESPN.

Upon graduation, Joe accepted a job as sports director/air personality at WCMA radio in Corinth, MS, where in addition to broadcasting local high school football & basketball, Joe was also a country music disc jockey. Sensing the locals would have a hard time pronouncing his last name, Sanchez was at first known as “The Midnight Yankee”. Upon moving to the midday shift, he adopted the name “Joe Ed” Sanchez. Joe always felt he showed either a great deal of courage or a great amount of naiveté heading to the deep south less than 10 years after the murder of the Civil Rights workers & Civil Rights bill, only armed with his sense of humor. In 2008, Joe returned to Corinth with his sons, Matthew & Zachary, to emcee the Centennial Celebration of the legendary Red Barber.

In 1974, Joe joined WDLC radio in Port Jervis, NY, first as a newscaster, & later as the morning air personality & sportscaster. It was while with WDLC that Sanchez met the love of his life, Pamela Whitney, whom he courted over the airwaves by playing certain Frank Sinatra ballads that would signal a romantic luncheon for the youngsters.

Joe also spent a season as morning deejay on WNNJ in Newton, NJ between his two tours at WDLC.

One of the great mentors of Joe’s radio career was WDLC owner, Oscar Wein, who tutored Joe on losing his New “Yawk” accent, of which Joe was unaware of.

In 1979, Joe & Pam moved to Vero Beach, FL, where Joe became the midday personality for WTTB Radio. Shortly after, WTTB changed its format from music to news talk. This coincided with the Los Angeles Dodgers placing a Florida State League franchise in Vero Beach. As Joe had moved to hosting a talk show on WTTB, “Open Line”, he was named the station’s sports director. At that time, the Dodgers contracted WTTB to broadcast all their away games & Joe was named the broadcaster for away games & public address announcer for the home games.

After the Vero Dodgers inaugural season of 1980, Joe & Pam were married in a private ceremony at their Vero home.

As Joe had set out in broadcasting to be a radio baseball play by play announcer, the Vero Dodgers microphone was a dream come true & was hoped to be a launching pad to a major league opportunity.

Joe broadcast Vero Dodgers games from 1980 through 1987. He also took on the play by play task for Vero Beach Fighting Indians football & basketball games. Joe was on the air for both the Fighting Indians drive to the 1981 FSHAA class 4A football championship as well as the Dodgers 1983 FSL championship season.

In 1984, Joe moved into car sales with Janie Dean Chevrolet. He still managed to stay on the air with both the Dodgers & the Fighting Indians, but in 1987, an opportunity to become Sales Manager at Janie Dean arose, & Joe made the tough decision of relinquishing his broadcasting duties to spend more time with his family. Looking back at his time with the Dodgers, Joe said, “It was always fun. They don’t say ‘Work ball,’ they say, ‘Play ball.’”

Joe later returned to the airwaves in 1988 with the newly combined WGYL/WTTB as the morning sports commentator & play by play man for Vero High sports. Having stepped down from a managerial position in auto sales, Joe continued as a sales rep & freelance broadcaster.

Joe’s final fling with sports microphones came in 2001, when the Vero Dodgers offered him an opportunity to do the PA again. Joe remained at the Holman Stadium mic into the Vero Devil Rays era until professional baseball left the County in 2008. In 2015, Joe retired, & enjoyed his days spending time with his family. He had many travel adventures with his wife, including treks across the country & several cruises, with his favorite being the transatlantic “Viking” cruise. Joe spent countless hours in his retirement playing his favorite game, Strat-o-matic baseball.

Joseph “Holiday Joe”, “Midnight Yankee”, “Joe Ed”, Sanchez, the Voice of the Vero Beach Dodgers, was deeply loved by all who knew him. It has been said, if you are truly fortunate, you might come across 2 or 3 friends like Joe in your lifetime.  Joe passed after a heroic 10-month battle with leukemia. His family was at his bedside in Vero Beach, FL. He is missed by all who knew him, but his spirit will live on through all of us. May he rest in peace.

Services for Joe will be held at Historic Dodgertown on Saturday, November 30th, at 11:00 am. In lieu of flowers, donations can be made to NPR or the Leukemia & Lymphoma Society.

I was at Seton Hall and WSOU with Joe and always liked and admired him.
What an amazing life he had, fulfilling so many of his dreams and having a great time along the way.
I’m sorry not to have had the chance to sit and have a beer with him once again.
I never hear Margaritaville without thinking of Joe Sanchez.

Joe was a great guy. During our time together at Seton Hall, I always enjoyed talking baseball with him. He was a true fan and I knew that he usually would have an interesting perspective when it came to dissecting the nuances of in-game strategy. Joe will be missed by many people here on earth, but I’m sure he is now holding court as he talks baseball with the other residents in heaven.

Please accept my deepest sympathy on the passing of Joe. He will definitely be missed!

I am so sorry for your loss. I am also so sorry that I did not get to know this amazing man better. I thank him and his wife for an amazing daughter, Nikola. Nikola is an amazing individual, this is a testament to her mother and father on how they raised her, she has brought my son so much joy and happiness. I appreciate Joe for how he raised Nikola. Nikola is a beautiful individual both inside and out. I am blessed that she is a part of our family and that I am a part of the Sanchez family. My thoughts and prayers are with the Sanchez family during this difficult time. This world is going to miss Joe – a great man with a great legacy. Nicki Andersen

While I didn’t personally know Joe, I could tell he was a wonderful person by the love his son Matt had for him that would come out in the stories he would share about his love of his family and baseball. Joe and Pam raised a great man in Matt and I have no doubt that his siblings are the same quality individuals as well. Deeply sorry for your loss, but take joy in knowing that your dad is up in heaven everyday calling games for baseball’s all time greats!

So very sorry for your loss. Joe lived an amazing life and is loved by so many. May God bless your wonderful family.
We are thinking of you all.
Our prayers and love during this sad time.
Melissa & Scott Wolffe
Twin Lakes

I send my condolences during this sad time. Joe was talented, unique and hilarious. He had a fantastic depth of knowledge of many subjects, including baseball and the arts. While it’s becoming a long time ago, I still smile recalling our times together with our Hall mates, visiting the Midnight Yankee in Corinth, Mississippi and rooming with him at the Scotland Arms in South Orange. His heavenly reward is assured for having so enriched the lives of those who knew him.