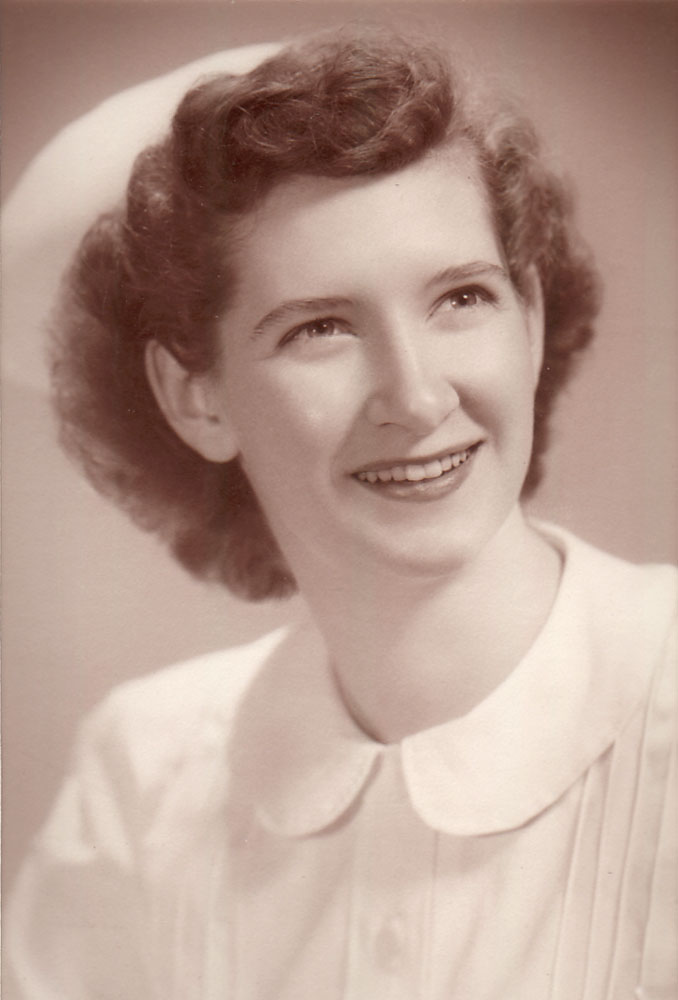 Venetta Julia Skow Bentley was born in Oakland, California, on November 29, 1927. She was the youngest of two children born to Nis Skow and his wife, Nettie Duncan. She grew up in Saranap, then a rural area east of San Francisco, where her father built the family home.

She graduated from Acalanes High School in 1945, briefly attended the University of California, and became a Registered Nurse after graduation from Samuel Merritt Hospital School of Nursing in 1950. She worked a short time at Children’s Hospital in Oakland before putting her nursing career on hold until the late 1960s to be a full-time mom to four children. Returning to nursing, she started at Kaiser Hospital in Richmond, then served the V. A. Hospital system for 20 years before retiring in 1989. She was commended for her exemplary service at the V. A. and was well-regarded by her co-workers.

Mom was always a social person with a sense of adventure. She enjoyed family & friends, travel,  theater, museums, mahjong, a good book, and a steak or lobster dinner.

At age 12 she, her older brother Ronald, and their nephew Alfred, rode the train un-escorted from Saranap to the 1939 San Francisco World’s Fair. She enjoyed travel, often with her lifelong nursing school friends. Trips to China and Italy to study nursing practices were career related adventures, while trips to New England, Morrow Bay and other places were just for fun with old friends. Her account of the China trip included a story about their bus taking a wrong turn, being stopped and boarded by soldiers with machine guns and people being interrogated before the bus was allowed to turn around.

Family vacations were usually camping trips that were the source of many fond memories for the kids. Grand Canyon, Yosemite, and summers at Pinecrest and Turlock Lake were enjoyable times, but she did regret the camping trip one summer at Pinecrest when youngest son Bob was still in cloth diapers.

After retirement, her son Jack built a house for her in the little town of Chester in the mountains of California, where she enjoyed the outdoors.  A part-time job at the library in town kept her socially involved and close to a supply of good books.  Her little house in the forest was a place where family – especially grand kids, and friends were always welcome and well-fed.

Winters in the mountains can be harsh, so after ten years in Chester it was time for a change. In 2000 she followed her daughter Peggy to Vero Beach where she enjoyed walks on the beach and could watch sunrises and hear the sounds of the ocean from her living room. She soon made many friends there, enjoyed the Vero Beach Museum of Art and McKee Gardens, and became part of a mahjong group that she hosted periodically even after she went into assisted living.

Again, her home in Florida was a place where family and friends were always welcomed. Sons Jack and Dick and their families always found a home away from home when they visited from California. Mom’s was a place where many happy times were enjoyed. There was always a little sadness when it came time for the California kids to head back home.  Especially memorable was the occasion of Jack and Susie’s wedding when Mom had all of her grandchildren and great-grandchildren frolicking on “her” beach together.

After enjoying many sun rises in Vero Beach, sunset came for Mom there on August 1st, 2020. She is survived by sons Dick (Nancy), Jack (Susie), and daughter, Peggy (Bill McGarvey), three grandchildren, and six great grandchildren. She was preceded in death by her youngest son Robert earlier this year and her daughter in law Blyth in 2013.

Services in Vero Beach will be announced at a later time. Interment will be private at Mountain View Cemetery in Oakland, California.

Arrangements are under the direction of Millennium Cremation Service, Vero Beach. Condolences may be shared online at www.millenniumcremationservice.com.